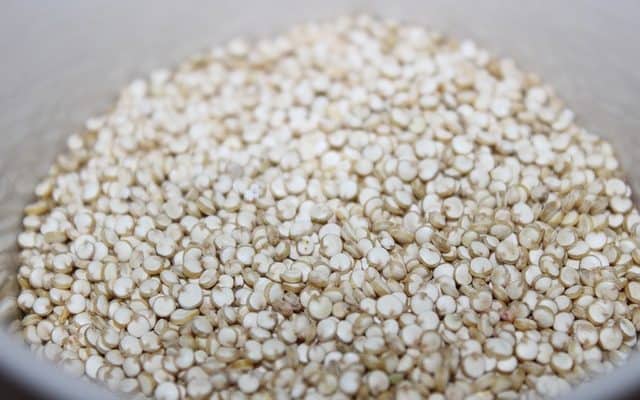 A common question of people who are just getting started with the keto diet is is quinoa flour keto friendly? Even though quinoa flour has fewer carbs than wheat flour, I still would not recommend it for a keto diet. In fact, just one 28 gram serving contains nearly more than half of most keto dieters’ daily net carb limit.

Quinoa, nicknamed the ”the mother grain” by the Incas, has been eaten and harvested for thousands of years. Though quinoa is typically prepared like a grain, it is actually a member of the chard and spinach family and is a seed, not a grain.

This little seed has become quite popular over the years. As someone who has spent many years in the natural food business, I can remember when my family’s little grocery store was one of the only places in town to buy quinoa.  Now you can find quinoa and quinoa products at just about any grocery store nationwide!

From chips to pasta, you can find quinoa flour in all kinds of products these days. However, even though these products may be delicious, they are still not well suited for a keto diet. So then why do some many people think quinoa flour is keto friendly? Well, I will do my best to answer that question.

Why Do So Many People Think Quinoa Flour Is Keto?

Quinoa is often touted as a modern-day superfood. This is understandable, of course, seeing as this gluten-free seed is packed full of beneficial nutrients. In addition, quinoa is a great source of plant-based protein. Because quinoa is plant-based, it is a very popular protein source in the vegan and vegetarian communities.

In addition to protein, quinoa also contains fiber, zinc, iron, and many b vitamins just to name a few. I could go on and on here but I think you get the picture. There are some obvious benefits for many people to incorporate quinoa or quinoa flour into their diet.

However, just because quinoa flour has some health benefits does not make it a great choice for the keto diet. For that matter, there are countless ”healthy foods” that are not ideal for the ketogenic diet. I believe this is where the confusion comes in.

After all, if something is healthy, why wouldn’t you want to include it on your diet? Well if your goal is to stay in ketosis, then, unfortunately, there are plenty of highly nutritious foods that you still need to stay away from. At the end of the day, keto is a high-fat, moderate protein, and very low-carb diet.

Quinoa flour, though nutritious, is still too high in carbs for me to recommend to anyone following a keto diet. Don’t get me wrong, if you can fit it into your daily carb limit, you will probably be ok. However, I couldn’t really think of a reason why you would want to do that.

How Many Carbs Does Quinoa Flour Have?

One-quarter cup or 28 grams of Bob’s Red Mill Organic Quinoa Flour contains roughly 19 total carbs. Of those carbs, 3 of them are in the form of dietary fiber. So after subtracting out the fiber, you are looking at roughly 16 net carbs per 28 grams of quinoa flour.

However, that is still a lot when you are trying to keep net carbs to 20 grams per day. If you do the math, just one serving of quinoa flour would equate to 80 percent of your net carbs for the whole day. Thankfully there are plenty of keto friendly flours that are great for a ketogenic diet.

Low-Carb Flours To Use Instead Of Quinoa Flour 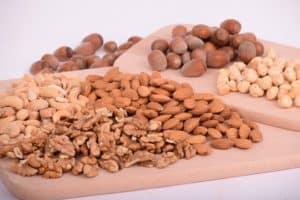 Unless someone has a nut allergy, nut flours are usually my go-to keto friendly flour substitute. Of all of the nut flours out there, I tend to use almond flour the most often. Though there are some keto flours I prefer over almond flour, it tends to be the most affordable and more widely available in stores. That said, it is also a fantastic keto flour.

Another great keto flour option to use over quinoa flour is pecan flour. In fact, the only thing keeping it from the very top of my list is the price and availability. However, if that is not an issue pecan flour contains even fewer carbs than almond flour.

In fact, one-quarter cup of pecan flour contains just 4 total carbs with 3 grams of fiber. That is only 1 net carb per quarter cup! In addition, it is also packed with a whopping 21 grams of fat! It doesn’t get much more keto friendly than that.

Hazelnut flour is another great keto nut flour. Though I have not used this flour as much as others it seems to be a pretty solid keto friendly flour. Like pecan flour, It has a great nutty taste and is very low in carbs. In fact, pecan flour is the only flour on this list that contains fewer carbs.

A one-quarter cup contains 5 grams of carbs with 3 grams of fiber. After subtracting fiber you are left with 2 net carbs. That’s one more net carb than pecan, one less than almond, and 14 less than quinoa flour. Needless if you are looking for a keto friendly flour, these nut flours are a much better option than quinoa flour.

Coconut flour is also a widely available low-carb flour that is used in many keto dessert recipes. Though I do not use it in many of my recipes, I still highly recommend it. Unlike almond flour, coconut flour does not measure cup to cup with regular flour. Typically you would want to use roughly 4-6 TBSP for every cup of wheat flour.

Either way, it is still only 6 net carbs which are still 10 fewer carbs per quarter cup than quinoa flour has. For more information on keto flour substitutes or keto baking in general, check out my keto baking guide.