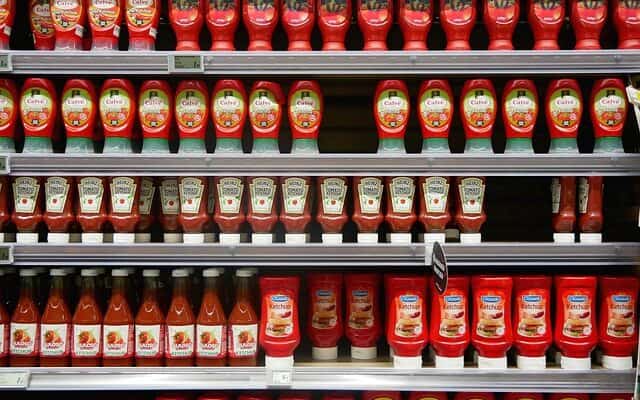 Ketchup is one of the most widely used condiments on the market, but when it comes to the keto diet you have to be selective about which variety of ketchup you use.

Ketchup could be included while on the keto diet without compromising your results as long you know what to buy and how to include it.

Why Most Ketchup Brands Are Not Keto Approved

Most ketchup brands aren’t keto-approved because they contain higher amounts of added sugar, and would add up quickly to put you over your daily carb allowance while on the keto diet.

I think most people would agree that one tablespoon of traditional ketchup isn’t worth using up most of your daily carb allowance. Luckily, there are brands of ketchup on the market that are lower in carbs that are a better option if you’re doing keto.

3 Things To Consider When Choosing A Keto-Friendly Ketchup

The 3 things to consider are:

One of the most important things to consider when choosing ketchup is whether or not the ketchup has added sugar. Some brands do advertise that they have no added sugar but actually do use honey or agave syrup. It’s important to look for one that has sweeteners rather than sugar itself.

Another thing to consider is the quality of the sweetener that is being used in the ketchup because some sweeteners are better than others when it comes to your overall health. Natural sweeteners like stevia are going to be the highest quality sweeteners and have less of an impact on digestion.

Some lower quality sweeteners like aspartame can cause digestive issues by impacting healthy gut bacteria, and therefore should be avoided.

The taste of the ketchup is another important quality to consider when choosing keto-friendly ketchup because if you’re not enjoying the foods that you’re eating, then you’re less likely to stick to the keto diet long-term.

My go-to keto ketchup brand is made by Primal Kitchen. This brand has been around for a while now and only uses high-quality ingredients. It contains no added sugars and only 2 total carbs per tablespoon. There is, however, one gram of sugar that comes naturally from the tomatoes.

That said, this ketchup contains less than half the carbs found in most other ketchup brands on the market. They also use organic ingredients and the product simply tastes amazing.

In addition, you can find primal kitchen products online and at many grocery stores nationwide! Primal Kitchen also makes spicy keto-approved ketchup as well, just in case you were looking for an extra kick!

My second favorite choice for keto ketchup is made by Health Garden because it’s sweetened with xylitol (which is a higher-quality sweetener) and tastes amazing. One tablespoon contains just 3 total carbs with 2 carbs coming from sugar alcohol of xylitol.

Sugar alcohols do not affect blood sugar in the same way that other carbs, so typically these carbs are subtracted from the total carbs to get your net carbs.

The only thing to be cautious of with the xylitol in this ketchup is that it is toxic to dogs and other animals. So just be careful not to leave this ketchup lying around your furry friends.

Another great keto ketchup is made by Guy Gone Keto. This keto-friendly ketchup contains no added sugars. It is sweetened with a mix of allulose, monk fruit, and stevia, all of which are good quality sweeteners for the keto diet. Theis ketchup only has 1 gram of carbs, which is from the natural carbs in the tomatoes themselves.

The only reason that this ketchup is third on the list is that they added MCT oil to it, which may seem like a bonus because MCT oil is a high-quality fat source, but ketchup doesn’t naturally have a fat source so adding these unnecessary calories isn’t really a benefit.

The downside of purchasing keto-friendly ketchup is that oftentimes the higher quality brands are hard to find, which is why I enjoy homemade ketchup!

If you’re someone who prefers to make their own condiments then you’ll love this Homemade Keto-Friendly Ketchup from the Big Man’s World.

Other Health Benefits Of Ketchup For Keto

The other health benefits of ketchup are that it:

Ketchup could improve your eyesight because it is high in Vitamin A and Vitamin C, which are both nutrients that play a role in improved vision. Consuming ketchup regularly could potentially provide enough of these nutrients to prevent age-related eye diseases.

There is a possibility that ketchup could reduce your risk for certain health disorders such as diabetes mellitus and cardiac complications because of lycopene. Lycopene is a carotenoid that is present in tomatoes and all tomato products.

The lycopene in tomatoes and tomato products has also been shown to support brain health by reducing the risk or severity of Alzheimer’s and Parkinson’s Diseases, although this has only been researched in mince thus far.

Though most brands of ketchup are not keto-friendly, there are a handful of companies that make keto-approved ketchup so as long as you know what to look for, then you can read the label and determine if the ketchup is keto.