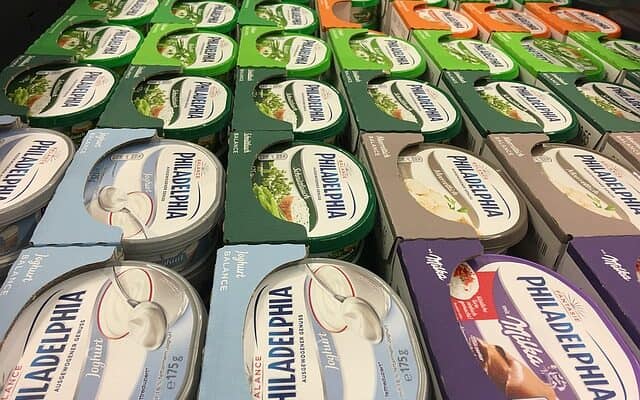 Cream cheese is a dairy product that is a staple in many diets, and perhaps could be included to spice up the keto diet as well.

Is Cream Cheese Keto-friendly? Yes, cream cheese is keto-friendly because it is higher in dietary fats and very low in carbs. It would be difficult to eat enough cream cheese to exceed your daily carb limit and get kicked out of ketosis, which is why cream cheese is a staple for those on the keto diet.

Cream cheese can be included in a variety of ways for those on the keto diet but is enjoyed most often as a keto dessert since dessert options are limited on the keto diet.

How Many Carbs Does Cream Cheese Have

Cream cheese is a great option for the keto diet because it has 99 calories and 2 grams of net carbs per serving (1 oz), which means that you can have a decent portion size of cream cheese without affecting your state of ketosis.

Most people on keto are trying to keep their net carbs to 25 grams or less to encourage ketosis and ultimately weight loss. With that in mind, you would have to eat thousands of calories worth of cream cheese to hit those numbers, which makes cream cheese a keto-friendly option.

Cream cheese is very low in carbs, but it is also loaded with fats (10 grams per serving) and has some protein (2 grams per serving), which is perfect for the keto diet. The main nutrients that you’ll consume on keto are fats and protein, so it pays to have options available so that you’re not struggling to find things to eat with the lack of carbs.

How To Include Cream Cheese On The Keto Diet

Cream cheese is keto-friendly, however, most of the foods you put cream cheese on are not so you’ll need to be creative with how you choose to incorporate cream cheese into your meals/snacks while on keto.

Cream cheese can be used as:

1. Cream Cheese As A Dip

You could include cream cheese whipped with some rosemary, garlic, and chives along with your favorite vegetables as a low-carb snack.

2. Cream Cheese As A Spread

3. Cream Cheese As A Stuffing

Cream cheese is also often used as a stuffing in dishes like bacon-wrapped jalapeno poppers or cream cheese stuffed chicken breasts, which can add an extra flavor boost to your meals and snacks while on the keto diet.

The third best keto dessert with cream cheese is my mini keto cheesecake recipe, which is great if you’re someone who struggles with portion control while on the keto diet because this recipe only yields 2 servings.

The mini cheesecake packs a flavour punch with only 3.6 net grams of carbs per serving which would leave you with plenty of carbs leftover for the rest of the day without affecting your ketosis.

Last but not least, is this mini keto cream cheese tart, which is a better size if you’re cooking for just one or two people. If you’re someone who likes a thicker crust for some crunch factor, then you’ll love this cream cheese tart recipe. Each Tart is 2 servings and only 3.2 grams of net carbs per serving!

For other keto dessert options made with cream cheese, check out my other article” 15 Amazing Keto Desserts Made With Cream Cheese“.

What Is The Best Cream Cheese For Keto?

Philadelphia cream cheese is a great brand of cream cheese for the keto diet as long as you choose the regular, rather than the lower-fat varieties because it only has 1 gram of net carbs, which is low enough to be considered keto-friendly.

Not only is cream cheese keto-approved, but it also tastes great and is versatile. Since cream cheese is loaded with fats and is low in carbs, you can enjoy quite a bit of it on the keto diet.