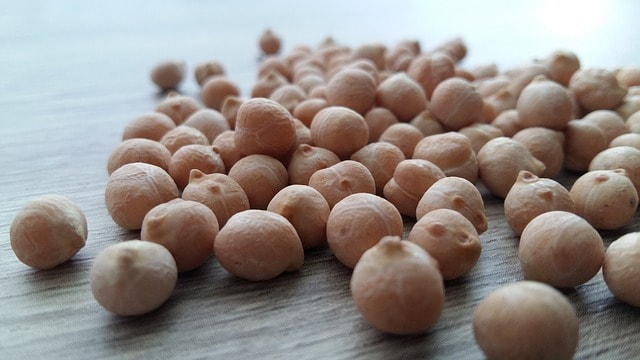 A question I hear all the time is: is garbanzo bean flour keto friendly? Though it does contain significantly fewer carbs than wheat flour, it is still is a poor choice of flour for a keto diet.

Don’t get me wrong–as long as you are keeping your total carbs under 50 or your net carbs under 20-25, it’s possible to get away with staying in ketosis. That said, there are far better keto friendly flours to choose when trying to keep your carbs to a minimum.

Also known as chickpea flour, garbanzo bean flour is a very common flour used in many recipes. Since chickpeas contain a fair amount of protein, they are often used in vegan and vegetarian recipes. These powerful little legumes are used to make vegan cheeses, dressings, and, of course, dips.

You may have even noticed that many companies are using chickpeas to make pasta, chips, and even chickpea fries. This is because these legumes are packed with protein, fiber, and many key nutrients.

However, just because something might be considered healthy, that does not make it a great option for a ketogenic diet. When following a strict ketogenic diet you are getting roughly 70-75 percent of your calories from fat, 20-25 from protein, and only 5-10 percent from carbs. Chickpea flour simply contains too many carbs to recommend for a keto diet.

So How Many Carbs Are In Garbanzo Bean Flour?

However, as previously stated, if you are trying to keep your net carbs to 2o per day, one serving of garbanzo bean flour still provides over half of your daily net carb intake. So instead of jumping on the chickpea bandwagon lets discuss some better flour options for the ketogenic diet.

Keto Flours To Use Instead Of Chickpea Flour 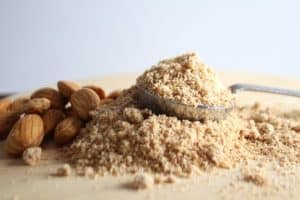 Almond flour would have to be my first pick as a better keto friendly flour substitute to use instead of garbanzo bean flour. Though it is not actually my favorite keto friendly flour, It is still the low-carb flour I use most often. This is simply because almond flour is widely available and usually costs less than many other nut flours.

Pecan flour is also a better option than chickpea flour as a keto flour substitute. In fact, pecan flour is probably my favorite low-carb flour, especially to use in my keto dessert recipes. This is because pecan flour contains ever fewer net carbs than almond flour does. In fact, 1/4 cup serving of pecan flour only contains about 4 total carbs, 3 grams of fiber, and only 1 net carb!

The only reason I do not recommend pecan flour over almond flour is that it can be expensive and hard to come by. Thankfully, however, It is pretty easy to make and is also available on Amazon. Pecan flour also has a great nutty taste. Which is great of course for many recipes, but not always the best option for some.

Another amazing keto flour to use instead of chickpea flour is coconut flour. This low-carb flour, like almond flour, is typically pretty easy to find. Many but not all people who are allergic to nuts can handle coconut flour without any issues. Check with your doctor first, of course, but coconut flour might be your best nut-free substitute for chickpea flour.

One-quarter cup of coconut flour contains just about 6 net carbs. This is still less than half as many net carbs as garbanzo bean flour. In addition, coconut flour does not measure cup-for-cup with wheat flour. That said, you will often be using significantly less coconut flour in your recipes than you would with many other flours. For more info on keto friendly flours check out my keto baking guide.

What About Hummus On Keto?

If you are anything like me, the main reason you wanted to know if garbanzo bean flour was keto is that you love hummus. Hummus, of course, is made with garbanzo beans. From my research, it seems that on average hummus contains about 14 carbs and 6 grams of fiber per 100 grams. That would equal just about 8 net carbs in about 6.67 tablespoons of traditional hummus.

So technically, if you wanted to work hummus into your daily carb intake you would likely be ok. However, hummus is still a bit higher in carbs than any food I would typically recommend on a keto diet. Thankfully there are so pretty great keto hummus recipes you can make yourself.

There are a ton of delicious keto hummus recipes available online that taste just like hummus. These keto-friendly recipes use ingredients such as macadamia nuts, avocados, almonds, and cauliflower to replace the chickpeas in their recipes. The end result is a great tasting keto friendly substitute for traditional chickpea hummus.

Though garbanzo bean flour is not the best choice for keto, there are still plenty of options to choose from. Heck, you don’t even need chickpeas to create your own keto friendly hummus! Of course, as I said earlier if you can work it into your daily carb intake, you will probably be ok.

However, in my opinion, there are too many other better options to choose from. So why waste your carbs on something easily replaceable like garbanzo bean flour or hummus? Anyway, I hope this article helped to clear the air on whether or not to use chickpea flour when following a ketogenic diet.