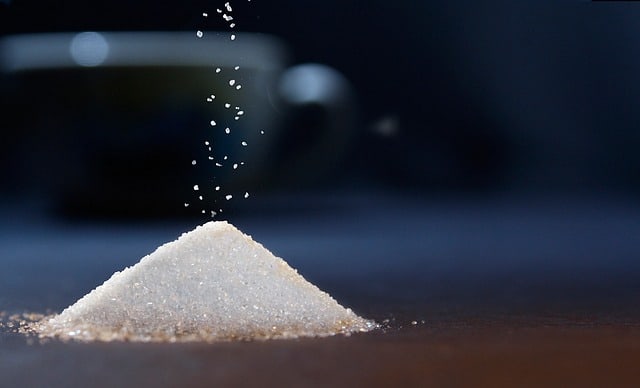 I remember the first time I brought a bag of Swerve sweetener home only to realize that there were 4 grams of carbs per tsp! I thought erythritol was keto friendly; this high number of carbs surprised me. Upon further investigation, I noticed the bag said 4 grams of carbs and 4 grams of erythritol. At the time I knew It was common to subtract fiber from total carbs but I knew nothing about subtracting erythritol.

It is very common for someone to buy some erythritol for the first time and notice that it contains carbs. Thankfully, however, you can rest assured that the carbs from erythritol will not knock you out of ketosis. That said, in large quantities, it may cause upsets stomach problems in some individuals.

Though these problems are not as common in erythritol as they are in other sugar alcohols. However, if you are new to using erythritol start off by consuming it in smaller quantities at least until you know your tolerance level.

Why Don’t Carbs From Erythritol Affect Blood Sugar Like Other Carbs Do?

Erythritol is a sugar alcohol that does not affect blood sugar like other carbs because our bodies are not able to digest it as it does with other carbs sources. Since we do not have the enzymes to break down erythritol it simply passes through our body without affecting our blood sugar levels.

Erythritol has a glycemic index of zero, which means it pretty much has zero impact on our blood sugar levels. For this reason, erythritol is counted as containing zero net carbs per serving.

However, as previously stated, be careful not to consume too much erythritol until you know how well your body handles it. Though erythritol is less likely to cause stomach problems like other sugar alcohols, there is still a chance you might be sensitive to it.

How To Use Erythritol Sweetener 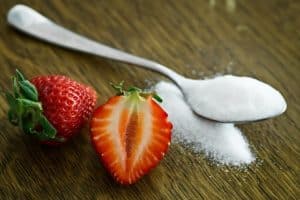 Erythritol sweetener pretty much measures cup for cup with regular sugar. Swerve Sweetener is my favorite erythritol product. Since it measures just like sugar it is very easy to bake with. In addition to granular, Swerve also makes a brown sugar and powdered sugar substitutes, both of which measure cup for cup with brown sugar and powdered sugar.

Swerve Granular Sweetener is the most used keto friendly sweetener used in my keto dessert recipes. Swerve is made from a mixture of erythritol and oligosaccharides. Oligosaccharides are non-digestible carbohydrates that are made from certain fruits and vegetables. These pre-biotic fibers are not only keto friendly but can even help stimulate certain beneficial bacteria in your gut.

In addition to baking, erythritol sweeteners are great for sweetening drinks such as tea and coffee. You can pretty much use erythritol any way that you might use sugar. That said, erythritol is known to have what is called the cooling effect. This is where you may experience a cool minty taste with some recipes when using erythritol.

This is especially common when used in a recipe that has very little moisture or fat.  If you are looking for some amazing recipes using erythritol I suggest checking out my article, 27 Amazing Keto Desserts Made With Swerve Sweetener!

Though erythritol is my personal favorite, there are a few other good keto-friendly sweeteners. The most popular, of course, is stevia extract. Though some people feel that the aftertaste of stevia is quite strong, if it doesn’t bother you, stevia can also be a great option for the keto diet.

Since stevia is MUCH sweeter than sugar it usually must be cut with another ingredient unless it is in liquid form. That said, be careful with how much you use when using it in its pure form. This can make it hard for measuring, which is why I typically do not use it in my keto baking.

Like stevia, monk fruit extract is keto friendly and much sweeter than sugar. My favorite monk fruit product is made by Lakanto monk fruit sweetener. Like Swerve they have a granular sugar replacement that measures cup for cup with sugar. Of course, since monk fruit is so sweet, it is actually a mixture of monk fruit and erythritol.

Take note that some keto advocates suggest avoiding keto sweeteners altogether. I disagree with this standpoint, however, as keto sweeteners like erythritol, stevia, and monk fruit have no effect on your blood sugar levels whatsoever. That being said, there is really no reason to avoid them. Using these sweeteners can help make the keto diet a sustainable, long-term lifestyle because they allow you to enjoy so many foods you otherwise couldn’t enjoy.

There can be a lot of confusion when you first begin your keto journey. Don’t be discouraged; learning the ins and outs of the ketogenic diet takes time. The basics come quickly but there is much to learn along the way. My goal is to give you the best recipes and resources you need to be successful in your keto journey, while also helping you to enjoy it as much as possible.