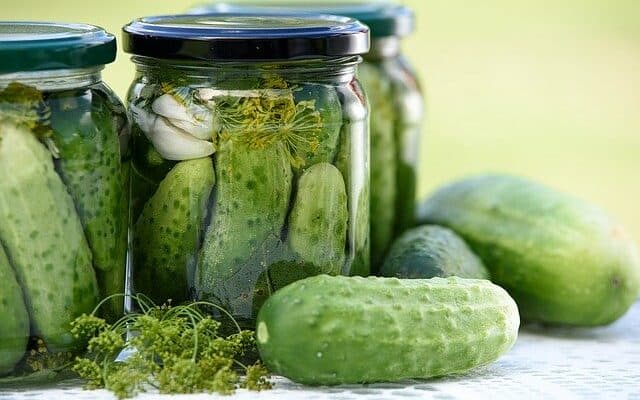 Depending on who you ask, you can get some very conflicting views about pickles for the keto diet. One expert will say pickles are not keto because they contain lectins. However, they are very low in carbs so many other experts will say that they are fine for the keto diet. In this article, I will address both of these points in more detail, but for now let me just give you the quick answer to the question: Are pickles keto?

That said if you want to avoid lectins in your diet then you might want to avoid them. I am simply showing the difference between eating clean vs eating foods that will actually kick you out of ketosis. There is a lot of debate in this area which I can hopefully clear up a little bit.

Why Some People Say Pickles Are Not Keto

Like I have already said, many people claim not to eat pickles on keto because of the lectins. Lectins are a type of protein that is found in just about everything that is living. That said, some foods contain higher amounts than others do. One of the foods that contain a fair amount of lectins is the cucumber which of course we make pickles out of.

Though I am not an expert on the matter, I believe that the negative press against lectins are a bit overexaggerated. Of course, this is not diet advice for you personally. I am sure that there are some people that are more sensitive to these proteins than other people are. So if you want to play it as safe as possible I guess you should avoid pickles on the keto diet.

My frustration is that many people impose there super clean eating guidelines on the keto diet. Don’t get me wrong I am a fan of eating as clean as you can while also being able to stick to your diet. But I also think many people fail at the keto diet because they made it way too strict. You want to eat clean but if your diet is too strict to follow for the long haul then you may want to reevaluate your diet. After all, who cares how great you eat if you only stick to it for a couple of weeks.

This is, of course, assuming you are in normal health and do not need to stick to a clean diet because of a health condition. If that’s the case then you need to work your diet out with a health professional. I simply want to point out what a keto diet is. In its simplest form, a keto diet is a diet that will get you into nutritional ketosis.

Most people achieve this by eating a diet of roughly 70-75% fat, 20-25% protein, and 5-10% carbs. In addition, you want to keep your carbs under 50 or your net carbs under 25 for most people. By doing that you are following a keto diet. Then you can decide for yourself how clean you want to eat. For example, I choose not to eat vegetable oils because I believe they will negatively impact my health and cause inflammation. At the same time, I do not believe vegetable oil will kick me out of ketosis.

Again, I am for eating clean, however, you must understand it is overeating carbs and in extreme cases protein that will kick you out of ketosis, not lectins. Eating clean is great but what is more important is creating a diet that you can actually stick to. So try to find the perfect balance for yourself. Simply put, eat as healthy of a diet as possible with a diet you can stick to for the long haul.

Why You Should Eat Pickles On The Keto Diet

The main reason I believe you should eat pickles on keto is that they are so low in carbs. One medium pickle contains roughly 7 calories with 1.5 grams of carbs and .8 grams of fiber. Giving one medium pickle around .7 net carbs. So yeah I guess I would not recommend eating 30 pickles a day but as you can see they are very low carb.

Pickles are especially good when starting the keto diet because they are high in sodium. Of course, you might want to talk to your doctor first especially if you have been told to keep your sodium levels low. However, your body does need some sodium, especially when starting a keto diet.

The sodium in pickles can help fight off what many people call the keto flu. It is commonly reported that people experience flu-like symptoms when starting the keto diet. This is usually because when you drastically cut your carbs you will lose a good amount of water. This is typically why you hear of people dropping 10 pounds in there the first week on keto. Of course, they often lose a good amount of fat as well but let’s not kid ourselves, if you lose 10 pounds in one week, a fair amount is going to be water weight.

Though pickles contain other electrolytes in smaller amounts, they are particularly high in sodium. Of course, many people are advised to keep their sodium low, so this is not for everyone. Either way, consult with your doctor before making any changes to your diet.

Another potential benefit of eating pickles is that some pickles contain probiotics. These are the pickles that are not made with vinegar. They are instead pickled in a solution of salt and water. So the addition of fermented pickles can have potential positive benefits to your gut microbiome.

Remember that pickles that have been pickled with vinegar do not contain these probiotics. You can usually find the fermented pickles in the refrigerated section of most health food stores. Of course, if you simply want to stay in ketosis, vinegar pickles are perfectly fine to eat. They are also typically a fraction of the price as well.

That said, If you can find and afford fermented pickles I would highly suggest them. In addition, many people like to make fermented pickles themselves. Though It has been a while, pickling cucumbers was one of my favorite things to grow in my garden. They produced so much fruit and since I could pickle them, they didn’t go to waste.

Its been too long for me to recall exactly how I pickled my own pickles but I remember it being easier than I thought. There are loads of great recipes to follow online if you want to make your own fermented pickles. It is definitely a fun and rewarding process!

If you want to know more about the keto diet or need help getting started, check out my keto diet guide. It contains just about everything you will need to get started on your keto journey!