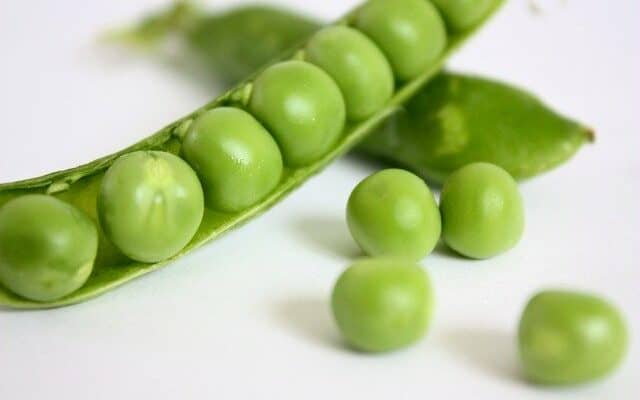 One example of this is peas. Peas are not vegetables. In fact, they are actually in the legume family. A legume is a plant that produces pods with seeds in them. A few examples would include chickpeas, green beans, and peanuts. So this begs the question: Are peas keto-friendly?

My recommendation is that peas should be avoided on a keto diet and are not keto-friendly. Of course, as long as you keep your carbs in check you could probably have some peas and stay in ketosis. However, they really are not worth the carbs when following a keto diet.

Of course, maybe you are just the person who loves peas so much that you want to figure out how many you can have on the keto diet. Well first off, let’s answer the question: How many carbs should you have when on a keto diet? I would recommend that for most people, you should stick to either 50 total carbs or 20-25 net carbs per day.

To figure out your net carbs you simply want to subtract carbs from fiber from your total carbs. There are also a few other carbs such as certain sugar alcohols like erythritol that can be subtracted from total carbs as well. For example if something has 5 total carbs and 2 grams of fiber, then this food has 3 net carbs.

How Many Carbs Do Peas Have?

Peas are becoming a very popular food choice these days because of there relatively high protein amounts. This legume is quickly becoming the new base for many plant-based protein powders. However, these legumes are not just a high source of protein, they also contain a fair amount of carbs as well.

If you are simply following a low-carb diet you can probably get away with some peas in your diet. But if you want to keep your net carbs under 25 grams a day, just one cup of green peas will take up over half of your allowed net carbs.

I am not sure how you feel but I personally do not think it is worth it to even try and fit peas into a keto diet. There are just so many better choices and by fitting them in you will have to keep the remainder of food intake very low in carbs.

It is important to remember that many foods that are keto-friendly do contain some carbs. You have to be careful even with keto friendly foods to not overeat carbs throughout the day. If you were to even eat half a cup of peas you would get 7 net carbs. Personally I would rather have a slice of keto chocolate cheesecake that has just over 5 net carbs than to waste these carbs on peas.

One thing about peas is that they are quite nutritious. They not only contain a good amount of fiber and protein but also many vitamins and minerals. Some of the more notable ones that peas contain include Vitamin A, Vitamin K, Vitamin C, folate, and manganese.

It is important to remember that there are plenty of foods that are not keto-friendly that would be considered nutritious. Meaning high in nutrition, not necessarily high in fats and low in carbs. On that same token, many foods that won’t kick you out of ketosis can still be bad for you.

That said, even though peas are nutritious, this does not mean you need them on a healthy diet. The goal of the keto diet is to stay in ketosis and there are plenty of other keto-friendly foods to get your nutrition from.

What About Pea Protein Powder On The Keto Diet?

Typically when most people think of the keto diet they think about a diet high in animal products. Though many people on keto do consume a fair amount of animal products, this is not always the case. More and more people every day are taking on a plant-based approach to the keto diet.

Pea protein is becoming very popular in the plant-based and vegan community. This might have many people asking the question: Is pea protein keto-friendly? The quick answer is that yes you can have pea protein powder on the keto diet. This is because they isolate the protein in the peas from the carbs and fats.

One scoop of Now Sports Pea Protein Powder contains 120 calories, 2 grams of fat, 1 carb, and 24 grams of protein. Now of course not all brands of pea protein are going to be the same but as long as you stick to pea protein with no added sugar, you should be ok. Just check the nutrition label and make sure everything looks alright before you make a purchase.

Pea protein has about the same macros as whey protein does and can be used the same way. One concern you might have is the fact that it has too much protein and not enough fat. After all, the keto diet is not just a low carb diet, but also a diet that is high in dietary fats.

That said, if you are concerned about this you could consider having your pea protein shake alongside a snack high in fats.  You might also consider adding some MCT oil powder to your shakes as well. By adding MCT oil you are adding quick-absorbing fats that will help keep your macros on point.

Peas are not the best choice for the keto diet. Even though they might contain vitamins and minerals, there are many other ways to get your nutrition. They simply are just not worth the carbs on a keto diet. On the other hand, if you are following a plant-based keto diet then you might consider adding pea protein to your diet.