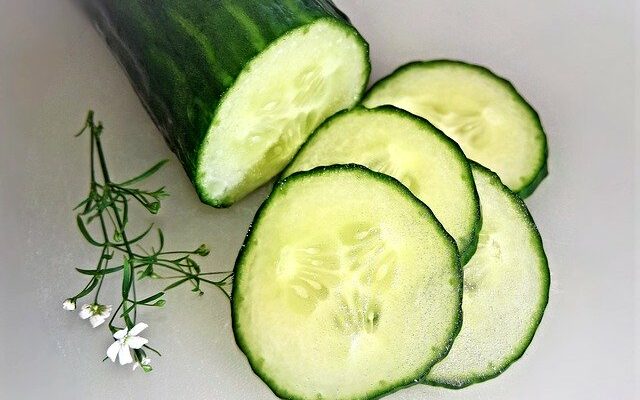 Cucumbers are known for being very low in calories because they’re full of water, but just because something is low in calories doesn’t necessarily mean that it’s keto-friendly, so it’s important to investigate further.

Are cucumbers keto? Cucumbers are keto-friendly, even though most of the calories in cucumbers are from carbs. This is because the water content of cucumbers is so high that you’re getting fewer carbs per serving, so you can have a larger portion while still keeping carbs low.

Although cucumbers are keto-friendly, they could still kick you out of ketosis if they’re overconsumed because they do still contain carbs. For this reason, it’s important to understand how much cucumber you should eat while on keto.

Cucumbers are keto-approved, but about 80% percent of their calories come in the form of carbohydrates. Since there are so few calories however it is still relatively low carb.

Most people on keto are trying to consume fewer than 25 grams of net carbs per day, so you can see how you would need to be mindful about the amount of cucumber you eat on the keto diet. I would recommend that you keep your cucumber consumption to half a cucumber or less per day while on keto.

How To Include Cucumbers On The Keto Diet

Cucumbers by themselves will digest relatively quickly because they’re low in protein and fats, so it’s important to pair cucumbers with other foods to improve their “staying power”.

You can include cucumbers by:

One-half cup of sliced cucumbers has less than 2 grams of carbs and 2 tbsp of Sir Kensington’s Avocado Oil Ranch has zero carbs and 18 grams of fat. This tasty snack combo has 18 grams of fat and fewer than 2 net carbs, making it a fantastic option for the keto diet.

As A Charcuterie Board

You could also include cucumber on a charcuterie board with cheese, olives, and deli meat for some additional fats and protein which will help to keep you full for longer.

Lastly, you could add cucumbers to a salad for a boost of micronutrients. In your salad, I would recommend adding a source of protein like chicken or steak and a salad dressing made with olive oil or avocado oil for some healthy fats.

Health Benefits Of Cucumbers For Keto

The health benefits of cucumbers are:

One unique benefit of cucumbers is that they can keep you very hydrated because about 95% percent of the weight of a cucumber is made up of water. This is why eating cucumber after an intense workout is very hydrating.

The mineral salts and vitamins in the cucumber along with the water it contains can encourage a faster recovery following a workout.

Cucumbers are loaded with water and with fiber, both of which are important for bowel regularity. For this reason, cucumbers are a great option for the keto diet because many people on keto struggle to maintain regular bowel movements because of a lack of fiber.

Cucumbers contain several antioxidants including vitamin C and beta-carotene. These antioxidants are shown to slow down or prevent damage to cells caused by free radicals, which could help to reduce your risk of cancer and heart disease.

In addition, cucumbers also contain flavonoids and lignans that may also have benefits to your health by potentially reducing inflammation.

Why You Should Buy Organic Cucumbers

Cucumbers are on the list of foods that many call the dirty dozen because the department of agriculture found that these foods contained more pesticide residue than other fruits and veggies. Because of this, it might be wise to go organic when purchasing cucumbers.

Pesticides can potentially cause many negative side effects on your body, and because they’re on the dirty dozen list, and you’ll likely eat the peel, it’s probably best to buy organic cucumbers.

Cucumbers VS Pickles For Keto

Pickled cucumbers (aka pickles) are one of my favorite snacks, especially when you’re just starting the keto diet because they’re high in sodium. Getting enough sodium when starting keto can help prevent or reduce the symptoms of the keto flu, which are symptoms that occur from a lack of electrolytes.

This is because when you cut out carbs your body starts to drop a lot of water, which is why people lose so much weight when they start keto.

When your body drops water you also drop electrolytes, which can cause you to feel unwell until your body reregulates itself. By snacking on foods high in electrolytes like pickles or drinking an electrolyte drink, the keto flu won’t have the same effects.

If you’re just starting on the keto diet, you should choose pickles instead of cucumbers. After the three weeks on keto, you could have cucumbers or pickles.

To learn more about eating pickles on the keto diet, check out my other article “Are Pickles Keto? (Yes, Here’s Why)“.

Cucumbers are keto-friendly as long as you eat them in moderation. To make the most of cucumbers on the keto diet, it’s probably best to pair cucumbers with other keto-friendly foods so that they keep you full for longer. In addition, you should consider buying organic cucumbers, to ensure that the benefits are outweighing the potential health risks.