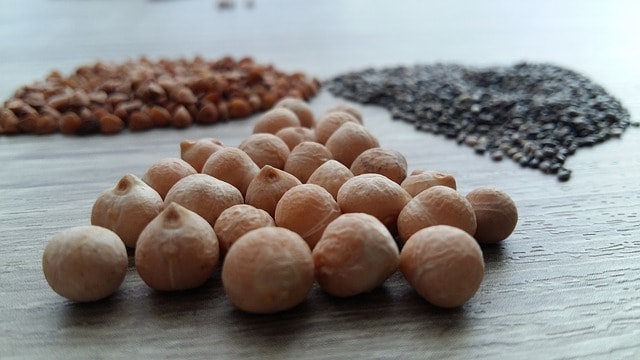 Chickpeas are one of the most popular legumes on the planet. Also commonly known as garbanzo beans, chickpeas are very common in Indian, middle eastern, and Mediterranean food. Most notably, they are the key ingredient in both hummus and chana masala. They are also a popular food for many people who are trying to lose weight. But what about on a keto diet? Are chickpeas keto?

The simple answer is that chickpeas are not a good option for the keto diet. Though it may be suitable for lower-carb diets, It still contains too many carbs to be considered keto-friendly. Just one cup of chickpeas has more net carbs than most people on keto eat in a day.

Of course, no one said you had to eat a whole cup of chickpeas. However, in my opinion, chickpeas are simply not worth the carbs. After all, a keto diet requires that you keep your net carbs very low. For most people on keto, you would try and keep your net carbs to under 25 per day.

That said, I guess as long as you keep your carbs in check you can have a small number of garbanzo beans on the keto diet. The real question, however, is why would you want to waste your carbs on chickpeas anyway? Of course, that question might be hard to answer until you know much you can eat without getting kicked out of ketosis. So let us look at how many carbs chickpeas contain in the first place.

How Many Carbs Do Chickpeas Have?

Though some people buy dry chickpeas and cook them themselves, I believe most people purchase them in the can. If you do buy dry chickpeas don’t worry we will talk about those later. That said, let’s see how many carbs are in canned chickpeas first.  One 15 oz can of chickpeas drained and rinsed contains roughly 467 calories, 7.4 grams of fat, 78 carbs, and 25 grams of protein.

Of those 78 carbs, 22 are in the form of dietary fiber. To get the net carbs we first need to subtract the fiber from the total carbs. Which means that one 15 oz can of chickpeas contains 56 net carbs. That is a good amount of net carbs, however, one whole can is quite a bit of food. So let’s break it down a bit and see how many carbs are in one cup of chickpeas.

One cup of canned chickpeas drained and rinsed contains 268 calories, 4.2 grams of fat, 45 carbs, 12 grams of fiber, and 14 grams of protein.  As you can see just one cup of chickpeas still contains about 33 net carbs. This is more than one person should consume in a whole day on the keto diet.  So even at a half or quarter cup, chickpeas contain too many net carbs for me to consider on the keto diet.

Can You Have Any Beans On Keto?

Depending on who you follow many keto influencers will claim that you cannot eat any beans on keto. This is mostly due to the fact that beans contain lectins and phytic acid. These are two ingredients that are not allowed on the paleo diet and many other clean eating plans. Though perhaps it may be a good idea to stay away from foods that are not considered clean, this does not mean they will kick you out of ketosis.

Don’t get me wrong, I support the idea that you should eat clean and healthy foods. I also agree that you should stay away from foods with potentially harmful ingredients. However, a keto diet is simply based on macros and following a diet plan that will get you into nutritional ketosis. This is typically achieved by eating roughly 70-75% of your calories from fat, 20-25% from protein, and only 5-10% from carbs. In addition, you would do this while keeping your net carbs to fewer than 25 per day.

It really is that simple. That is what a keto diet really is. Now with that, you can choose to eat as clean as you want. But it is the number of fats and carbs you eat per day that is going to determine whether or not you stay in ketosis. I say this not to encourage eating poorly but to help end the confusion for many new people starting the keto diet. In addition, to avoid the comments from people telling me that beans are not keto because they contain lectins and phytic acid.

That said, there are some beans that do not contain as many carbs as other beans do. So as long as you keep your net carbs to under 25 and eat plenty of fats they will not likely kick you out of ketosis. However, you are your own judge on how clean you want to eat on keto. Even so, there are still only a few beans or legumes even worth looking into on a keto diet.

The first one is green beans. This low-carb legume contains only 7 carbs with 2.7 grams of fiber per cup of chopped. Giving it just about 4.3 net carbs per cup. Another one you may look into is edamame which contains roughly 5.7 grams of net carb per cup. Of course, for me, the most interesting legume to look into is the black soybean.

One-half cup of Eden black soybeans contains 8 carbs with 7 grams of fiber.  That equates to just 1 net carb per half-cup. That is pretty darn good when it comes to food in the legume family. In addition, it contains 6 grams of fat and 11 grams of protein. So by just looking at the macros, you could say it is perfectly fine for the keto diet. That said, if you choose to stay away from soy products then they are of course off-limits.

What About Hummus On Keto?

When I think about chickpeas, hummus is what first comes to mind. I absolutely love hummus. However, it does contain more carbs than I would typically recommend for keto dieting. On average hummus seems to contains about 3 net carbs per 2 Tbsp. That is not by any means low when considering we are only talking about a few tablespoons.

That said, as long as you keep your carbs in check you can obviously eat a small amount of hummus on a keto diet. Though I do love hummus I would say that for me it is simply not worth the carbs. Thankfully, however, there are plenty of great keto hummus recipes online that you can find.

Typically these keto hummus recipes call for keto-friendly ingredients like macadamia nuts and avocados instead of chickpeas. That said, I would recommend making your own hummus if you want to keep it as keto-friendly as possible.

Chickpeas are not what I would call a keto-approved food. That said, you can fit a small amount into your diet as long as you keep your carb counts in check. However, it simply does not seem worth it to me. With just a few exceptions beans and legumes are not great for keto diets. This is simply because most of them contain far too many carbs.

If you want to find out more about the keto diet I would suggest you check out my keto diet guide. In this article, I go over just about everything you need to know to start your keto journey.