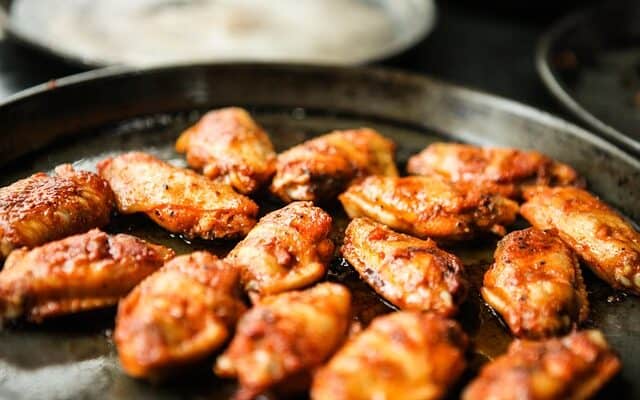 Are chicken wings keto? Unbreaded chicken wings without sauce are low in carbs and are considered keto-friendly because they have 0 grams of carbs per serving, which is ideal for the keto diet where most individuals are trying to keep their net carbs below 25 grams per day.

Keto-friendly chicken wings don’t have to be boring and flavorless though, you can spice up your wings as much as you like if you’re mindful of how many carbs you’re adding when you’re choosing your sauces and seasonings.

Chicken wings are keto if you’re having unbreaded wings because without a sauce or seasoning. Chicken wings themselves have 265 calories, 23.1 grams of protein, 18.4 grams of fat, and 0 grams of carbs per 100-gram serving.

The wings with breading aren’t keto-friendly because the breading will add too many carbs for you to stay in ketosis. To encourage ketosis most people try to stay under 25 grams of net carbs per day, and breaded chicken wings have 15 grams of carbs per 100-gram serving.

These values don’t include any sauce that you might want to add to your chicken wings to boost the flavor, so it’s important to note that if you’re adding a sauce, the number of carbs will likely increase further.

How To Include Chicken Wings On The Keto Diet

You can include chicken wings on the keto diet quite easily if you’re having unbreaded wings with low-carb flavorings because they will be low enough in carbs that they won’t affect your ability to stay in ketosis.

The best way to achieve this is to make your chicken wings at home because it’s just as easy to buy them and make them yourself, and this way you can guarantee that they’ll be unbreaded and have more control over the flavorings used.

When you’re ordering wings at a restaurant it can be harder to find wings that don’t have breading or are coated in cornstarch (which is also a carb). Additionally, wings that you order from restaurants are deep-fried in vegetable oils. Vegetable oils won’t kick you out of ketosis, but they’re still not the healthiest choice.

If you’re making wings at home, then you could have them as often as you like; but if you’re having wings at a restaurant, then you should probably have these less frequently.

Best Wing Flavors To Order While On Keto

If you do decide to eat wings at a restaurant then it’s important to know which flavor of wings you should order based on which sauces/seasonings are lowest in carbs.

The 7 best flavors of wings to order are:

Salt and vinegar is another dry rub flavoring that you can get that only has 1 gram of carb per serving. Therefore, the salt & vinegar dry rub wings only have 1 gram of carbs per pound of wings.

The only reason that these wings are in second place, is because they’re higher in sodium (+200mg per serving) than the lemon pepper wings, which could be a turn-off for those with high blood pressure.

The third best wing flavor for those on keto is a buffalo dry rub seasoning because it only adds 2 grams of carbs per serving (1 lb of wings).

The buffalo dry rub is the best keto-friendly flavor for those who like a spicer wing flavor, because you get the crispiness of the wing, and the spice from the dry rub, without all the carbs.

For those who like some spice but not a ton of spice, a chipotle bbq dry rub might be a better option when you’re ordering your keto-friendly wings.

If you prefer a sauce over a dry rub for your wings but you still want to keep your carb intake low, then a mild sauce is the best option.

If you prefer a medium sauce to a mild sauce, then you’re in luck because a medium wing sauce generally only has 4 grams of carbs per pound of chicken wings.

A medium sauce is best for those who like a saucy wing with a moderate amount of heat,  while still keeping carbs relatively low.

The last keto-friendly wing flavor that you could order is a hot sauce, which has 5 grams of carbs for a 1lb serving of wings. This is getting higher up there in carbs at 20% of your daily total intake (if you’re aiming for 25 grams per day).

This is the best low-carb wing flavor for those who love as much heat as possible and don’t care as much for a dry rub.

I actually prefer to make chicken wings at home most of the time because you can reduce healthy fats, and have more control over how many carbs your sauces and seasonings have.

The vegetable oil that they use in most restaurants for deep frying has been shown to cause inflammation in the body, so it may be best to avoid consuming them regularly.

The best way to make chicken wings at home is actually to air fry them! I use a high-quality air fryer like a Cosori Air Fryer because it makes the wings nice and crispy without any oil.

If you don’t have an air fryer then you could bake them in the oven instead, but you’ll have to use a bit more oil to get them nice and crispy. I would recommend using avocado oil which is a healthier fat source that’s best used for high-heat cooking.

Do Fried Chicken Wings Have Carbs?

Fried chicken wings don’t have carbs if they’re plain unbreaded chicken wings; however, if they do have breading they will have 15 grams of carbs per 100-gram serving. Adding a sauce to your wings will also increase the carb content depending on which flavor you choose.

Which Chicken Wing Flavor Is The Most Keto-Friendly?

The best keto-friendly chicken wing flavors are dry rubs because they have fewer carbs per serving than sauces do. If you do choose a sauce over a dry rub, then pick a sauce that has less sugar like a mild, medium, or hot sauce.

The wings at buffalo wild wings can be keto-friendly because you can get them without breading and they have a variety of dry rubs and sauces that are lower in carbs. As long as you’re choosing a dry rub or a mild, medium, or hot sauce to flavor your wings, then it will be keto-friendly.

As long as you choose an unbreaded wing and a low-carb sauce, then you can have chicken wings on the keto diet. However, I would recommend making your wings at home more often than ordering them at a restaurant because of the type of oil used. Although a lower-quality oil won’t kick you out of ketosis, it’s still not the best option for your health.