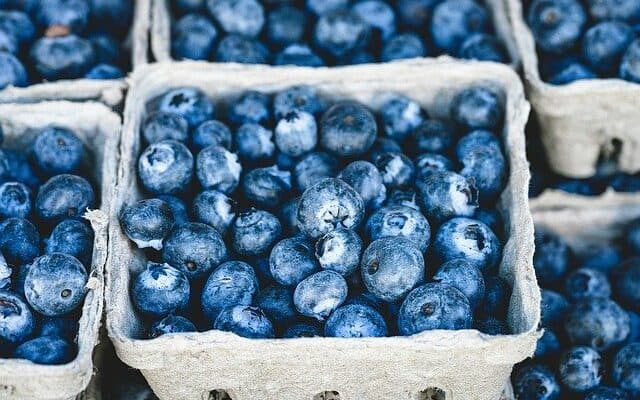 Blueberries are a type of fruit that are jam-packed with vitamins and minerals, and because of this have many health benefits, but they may not be the best option for those on the keto diet.

There are reasons why you may want to include blueberries on the keto diet, but you should first understand how to include them without compromising your results.

Why Are Blueberries Not Keto-Friendly?

Blueberries aren’t necessarily keto-friendly because like all other fruit, they contain a higher amount of carbs which makes them a less favourable option for the keto diet, where the goal is to keep carb intake low.

Blueberries contain roughly 85 calories, .5 grams of fat, 21 grams of carbs, 3.6 grams of fiber, and 1.1 grams of protein per cup. To calculate the net carbs of blueberries, we simply need to subtract the fiber from the total carbs. This would equate to 17.4 grams of net carbs per cup of blueberries.

Although 17.4 grams may not seem like many carbs, if you consider that many people on the keto diet try to keep their daily carb intake under 25 grams, then this is a significant amount of carbs for someone on keto.

Blueberry Alternatives For The Keto Diet

The 3 best alternatives for blueberries on keto are:

Blackberries are one of the best alternatives to blueberries for the keto diet because one cup of blackberries contains roughly 62 calories, 13.8 grams of total carbs, and 7.6 grams of fiber, which equates to 6.2 grams of net carbs per cup.

The second-best alternative for blueberries on the keto diet are raspberries because they contain just a few more carbs than blackberries. One cup of raspberries contains about 64 calories, 14.7 grams of total carbs, and 8 grams of fiber, which equate to 6.7 grams of net carbs per cup.

Raspberries are a great alternative to blueberries because they contain 10.7 grams of net carbs less than blueberries per cup. So if you love raspberries you can fit a small amount into your diet more easily without getting kicked out of ketosis.

The third best alternative to blueberries while on the keto diet are strawberries because they have around 8.4 grams of net carbs less than blueberries.

One cup of strawberries contains roughly 49 calories, 12 grams of total carbs, and 3 grams of fiber, which means that one cup has around 9 grams of net carbs.

They may not be as low carb as the other two alternatives but they’re still lower than blueberries, which is helpful when you’re trying to be strategic about how many carbs you’re eating per day.

Health Benefits Of Blueberries For Keto

The health benefits of blueberries are that they:

The antioxidants in blueberries also give them the potential to increase your brain function and improve memory as you age by benefiting aging neurons, which are cells in the brain that are responsible for relaying signals.

How To Include Blueberries On The Keto Diet

Although blueberries aren’t the most keto-friendly option, they can still be included in the keto diet as long as you’re not overconsuming them and going over your daily carb allowance for staying in ketosis.

Although 1/4 cup is a smaller serving size, if you really love blueberries but want to do the keto diet then you could include them in this amount and still have carbs leftover for other meals or snacks of the day.

The 2 best keto-friendly recipes that include blueberries are:

Are blueberries more keto-friendly than other fruits?

Are blueberries better or worse than other berries for keto?

Blueberries are higher in carbs than blackberries, strawberries, and raspberries so they may not be as good of an option on keto if you want to make the most of your daily carb allowance. However, blueberries still have a lot of great health benefits for those on the keto diet.

Blueberries are not the best choice for the keto diet; however, they’re lower in carbs than many other fruits and have lots of health benefits.  Although, you could opt for other types of berries with similar benefits and use less of your daily carb allowance.