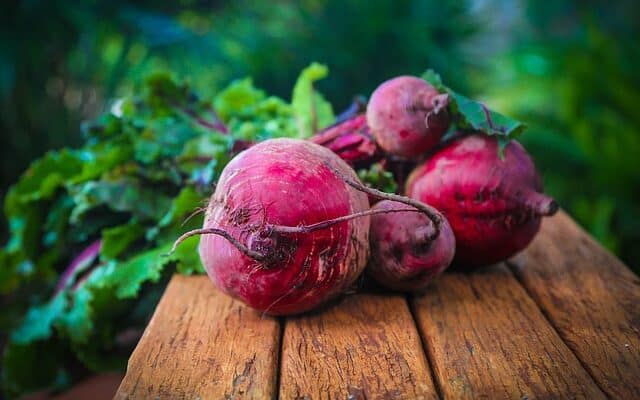 Most vegetables are low enough in carbs to be included in larger quantities while on keto, but root vegetables like beets may not be the best choice for those on keto.

Are beets keto-friendly? Beets aren’t keto-friendly because they have 10 grams of carbs per 100-gram serving. Additionally, over 80% of the calories in beets are in the form of carbs with almost 7 grams of sugar and only 2.8 grams of fiber.

That being said, if you’re someone who loves beets, then there are ways that you include beets while on the keto diet without ruining your progress.

Beets are not keto-friendly because one cup of beets has a whopping 13 grams of carbs. Of those carbs, about 3.8 grams are from dietary fiber, which can be subtracted from the total number of carbs to find your net carbs.

While on keto, it’s best to track net carbs rather than total carbs because fiber isn’t absorbed by your body and is used for digestion alone; therefore, it shouldn’t contribute t your daily carb allotment.

After subtracting the fiber, one cup of beets yields 9.2 grams of net carbs, which is a higher carb intake relative to the volume of food per serving.

Although 9 grams of carbs may not sound like much, it’s nearly half of your daily total intake of carbs, assuming that you’re aiming for 25 net grams of carbs per day.

How To Eat Beets On The Keto Diet

Although I’ve just explained that beets are high in carbs for the amount that you get per serving, there are ways that you can still include beets while on the keto diet.

As long as you’re staying within your daily carb allotment to stay in ketosis, then beets can be consumed while on the keto diet. I would recommend sticking to a serving size of around 1/2 cup of beets because it gives you some wiggle room for the rest of your meals.

You could have beets on their own, or you could use them in a recipe which is my favorite way to include beets!

The best keto-friendly beet recipes are:

Health Benefits Of Beets For Those On Keto

Beets are highly nutritious and can provide many health benefits so it may be worth including them in smaller serving sizes while on the keto diet.

The health benefits of beets are that they:

Beets have been shown to help boost athletic performance because of the nitrates that they contain. Nitrates play a role by positively impacting the part of your cells that produce energy.

Additionally, beets have been shown to help boost your endurance by helping to make your cardiovascular system more efficient and delaying the time to fatigue.

Therefore, if you’re someone who is focused on performance goals, then including beets while on the keto diet could be worth it.

Research shows that consuming beets regularly could help to lower your blood pressure, which can positively impact your overall health by decreasing your risk of a cardiovascular event.

If you’re someone who has high blood pressure, then it may be worth incorporating beets while you’re on the keto diet.

Another health benefit of beets for those on keto is that they help to improve digestion because beets are high in fiber which is important for keeping you regular.

The fiber from beets can help to prevent digestive issues like diverticulitis, IBD, IBS, and constipation. In addition to this, an adequate fiber intake has been shown to decrease the risk of other health complications like type 2 diabetes, colon cancer, and heart disease.

An adequate fiber intake is a common struggle for those on keto because your carb intake is restricted. This makes it difficult to consume enough fiber to encourage better digestion. For this reason, you could seriously benefit from including beets in your meals while on keto.

Pickled beets aren’t keto-friendly because beets themselves have 7 grams of sugar; however, pickled beets could be very beneficial for those on the keto diet because of the prebiotics and probiotics that they have, which are important for improving your digestive health.

Roasted beets aren’t keto-friendly because there are too many carbs per serving; therefore, you couldn’t have too many beets while staying in ketosis. However, if you reduced your serving size and you used healthy fat like avocado oil for roasting, then they would provide some health benefits without ruining your progress.

Beets aren’t keto-friendly because they have too many carbs per serving; however, they can be included in smaller amounts. You may want to include them in some capacity because of the array of health benefits that beets have to offer.